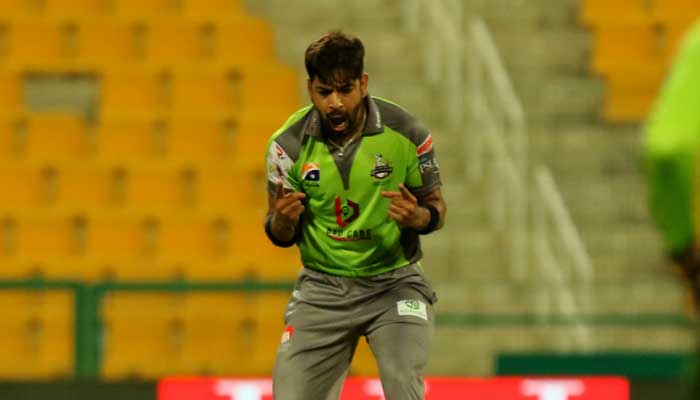 KARACHI: Lahore Qalandars’ fast bowler Haris Rauf has completed a century of his T20 wickets, achieving the feat from 71 matches, becoming only the second pacer from Pakistan to do so.

The 27-year-old right-arm fast-bowler reached the 100 T20 wickets mark on Thursday night during a PSL 2021 match against Peshawar Zalmi when he was able to dismiss Shoaib Malik – his only wicket in the match.

Saeed Ajmal and Umar Gul are joint leaders from Pakistan in the list of quickest to reach 100 T20 wickets, both bowlers reaching the milestone in their 68th match.

Haris Rauf, after being spotted during Lahore Qalandars’ player development program, started his T20 career at the same venue, representing Lahore Qalandars in the Abu Dhabi T20 Cup. He launched himself on the T20 arena when he got the wicket of Macalister Wright of Hobart Hurricanes in his debut match.

Since then, the fast bowler never looked back.

Of his total 100 wickets, 30 came when Haris was representing Lahore Qalandars while 25 of his wickets came representing Pakistan in T20Is. For his domestic regional side Northern, Haris Rauf has taken 24 wickets while 21 were taken in the Big Bash League while representing Melbourne Stars.

His favourite opponent, though, seems Zimbabwe as he has taken 10 wickets against the international cricket minnows. Nine of his wickets came against the Sydney Thunders side in the BBL.

Haris’ favourite stadium, according to the break up of his 100 wickets, seems the Rawalpindi Cricket Stadium, where he has managed to take 14 scalps. At Karachi’s National Stadium, the fast bowler got 11 wickets while in Multan, he managed to take 10 wickets.