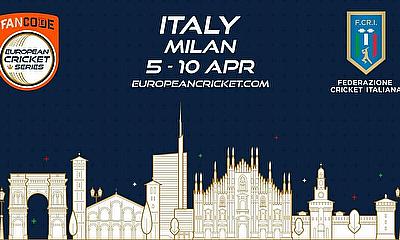 PU vs MK Dream11 Prediction, Fantasy Cricket Tips, Playing XI, Pitch Report, Dream11 Team, Injury Update of FanCode ECS T10 Milan match between Pioltello United and Milan Kingsgrove. They will play against each other for the first time in this season of the FanCode ECS T10 Milan.

The 1st match of the FanCode ECS T10 Milan will see Pioltello United facing off against Milan Kingsgrove on 5th April at the Milan Cricket Ground.

This game is scheduled to start at 1:00 PM IST and the live score and commentary can be seen on FanCode and CricketAddictor website.

The first edition of the FanCode ECS T10 Milan will commence on the 5th of April at the Milan Cricket Ground and the final will be played on the 10th of April.  Eight teams will be taking part in this tournament which will be divided equally into two groups.

Pioltello United will make their debut in this season of the FanCode ECS T10 Milan whereas Milan Kingsgrove made their debut in the last season where they were unable to win even a single game out of their five matches.

Pioltello United and Milan Kingsgrove will open the tournament as they will be taking on each other in the inaugural match.

Imran Haider, Vissal Hussain, Ahmad khan and Anees Aslam are the important players from the Pioltello United side while Dinuka Samarawickrama, Ahmed Muhammad, Ali- Usman and Deshan- Fernando are the key players for the Milan Kingsgrove.

The temperature is expected to hover around 16°C on the matchday with 42 % humidity and 11 km/hr wind speed. There are no chances of precipitation during the game.

The pitch at Milan Cricket Ground is a relatively unknown wicket but the pitches used for the ECS T10 matches are usually batting-friendly ones. So it is expected to remain the same.

(Will be added when there is an update)

Imran Haider is a right-handed wicketkeeper-batsman from Pioltello United who can also bowl part-time right-arm leg-break with the ball.

Ahmad Khan is a right-handed batsman and right-arm medium pacer from Pioltello United who is known for his hard-hitting abilities.

Ali- Usman is a right-handed batsman and left-arm fast bowler from Milan Kingsgrove who will be a great choice for captaincy in your fantasy teams.

Ahmed Muhammad is a top-order batsman from Milan Kingsgrove who can open the innings for them and will be eyeing to help his side with a flying start.

Suggested Playing XI No.1 for PU vs MK Dream11 Team:

Suggested Playing XI No.2 for PU vs MK Dream11 Team:

Ali- Usman will be a safe captaincy choice for this match. Anton Krishan Rodrigo and Haseeb Ansari are the punt-picks here. The best-suggested combination for this game is 1-3-4-3.

Milan Kingsgrove is expected to win this match.